TPF Pune invites you to a practical Scientific Meditation session. 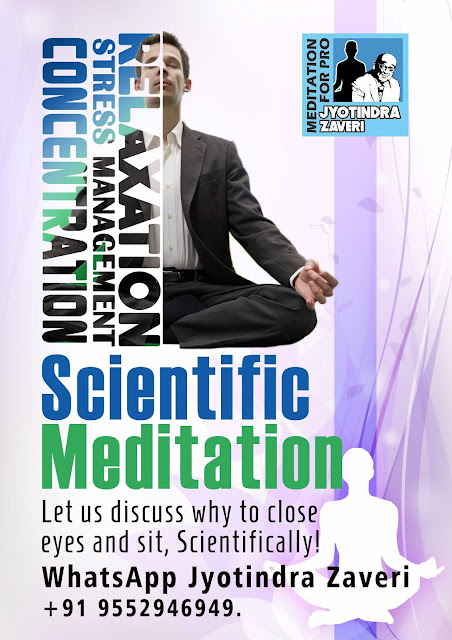 Preksha Dhyan can solve some health issues that perhaps medication may not be able to solve! Learn the step-by-step method.

Preksha Dhyan is a proven Scientific system, discovered from the ancient Jain scriptures.

Note:
1. Carry Mat with you.
2. Please bring your pen and notebook.

• I believe that reading and listening alone will not help in understanding the topic of 'Dhyan'.  I would like to carry out a few practical exercises as well. Many professionals have benefited from these result-oriented methods.

Posted by Jyotindra Zaveri at 3:54 AM No comments:

The humanistic gesture has made Mukesh Ambani top the God's list of "Humanitarians"!

Prof. Muni Mahendra Kumar the mastermind behind the I-ARTIST (international Ahimsa research & Training Institute of Spiritual Technology) remarked that in the God's list of Humanitarians (not Forbes's list).

The name of Shri Mukesh Ambani is at the top.  Mukesh's gesture is to be assessed in the light of the fact that in the past Anil (his real brother) was his contestant.


In almost all Indian schools of Darshan (philosophy) and Dharma (religion), in general, and in Jainism in particular, such kind of magnanimity has been considered to be the implementation of Dharma in actual life.

Prof. Muni's appreciation of Mukesh's "magnanimous" humanness is as follows:

"We are living in the world today where greediness, selfishness, dishonesty, vengeance, jealousy, ego, cruelty, etc. reign supreme in the human mind.  Running after monetary gains have shattered all values in smithereens making man utterly greedy, egoistic, and selfish.

In such a state of affair, what Shri Mukesh Ambani has done is indeed the highest summit of true religion and spiritualistic traits.  "A friend in need is a friend indeed."

By selflessly giving the colossal sum of ₹ 550 Crore to Anil's company (his elder brother), Shri Mukesh Ambani has shown that he has put into practice the maxim of Bhagwan Mahavira's principle of APARIGRAHA -

In view of such an act of "detachment to money," Shri Mukesh Ambani deserves the epithet MANAVA RATNA.

•    Muni Mahendra Kumar, a disciple of the great Acharya Shri Mahashraman.  Mumbai.  19 March 2019.
•    Contact C/o Jyotindra Zaveri (younger brother of Muni Mahendra) +91 9552946949
•    OR Prahalad +91 9619821485.
-
Click here to learn more about Prof Muni Mahendra Kumar: Living Legend video
-
News Mukesh Ambani's brotherly gesture is a ray of hope for Anil Ambani: The Supreme Court had given a deadline of 19 March 2019 to pay all the dues to Ericsson. Mukesh Ambani paid to RCom's operational creditor Ericsson from his personal wealth to bail out RCom.
-
News Anil Ambani thanks elder brother Mukesh Ambani for paying Ericsson dues:
The bailout from the world’s 13th richest man, as per Forbes ranking, came literally at the eleventh hour — Tuesday was the deadline for Anil’s Reliance Communications to clear Rs 580 crore due to the Swedish equipment maker.

Posted by Jyotindra Zaveri at 6:23 AM No comments: