An unprecedented combination of
Scientists, Philosopher, and Academia
on the same stage! 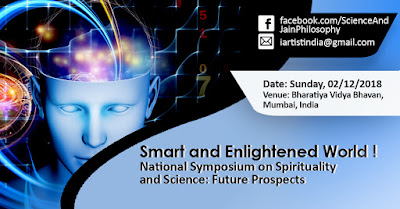 • The book containing proceedings of the - International Conference
on Science and Jain Philosophy which was held at IIT Bombay during
January 8-10, 2016 titled “JAIN PHILOSOPHY: A SCIENTIFIC APPROACH
TO REALITY” will be released. The foreword by Prof. Muni Mahendra Kumar.

• First Research Project - “Scientific Research including Neurological
Biochemical & Physiological Effects of SPIRITUAL TECHNOLOGY ON
PREVENTION & CURE OF DEPRESSION” of the I-ARTIST will be launched.

For invitees only. For details Email iartistindia@gmail.com

To know more about the living legend Prof. Muni Mahendra Kumar
and how science  is connected with the philosophy like and follow:
https://www.facebook.com/ScienceAndJainPhilosophy/
Posted by Rituparna Das at 8:48 PM No comments:

Hello, friends, I am most excited to introduce you to a person who is not only a Saint, a philosopher but also a great Scientist.

• Muni Mahendra Kumar is a versatile scholar of diverse disciplines like Physics, Mathematics, Biosciences, Philosophy, Psychology, Parapsychology, Ancient History, and Meditation; besides being conversant with the modern languages including English, German, Hindi, Gujarati, Rajasthani and ancient languages including Sanskrit, Prakrit, and Pali. He has learned 18 languages!
• It is a fact that pure philosophers cannot comprehend the nature of the universe without the help of science. On the other hand, pure scientists also cannot give a systematic and consistent form to their ultimate theories of the universe. A newly advanced harmony is urgently needed today to unite science and philosophy, but there are only a few persons who will be able to undertake such a task.
• Muni Mahendra Kumarji holds a distinguished place of honor amongst such scholar-gems. On one hand, he has made a deep study of modern science, and on other hands, he is an expert of philosophy. He has the same expertise in both the Jain doctrine of syādvāda and the Einstein theory of relativity and Quantum Mechanics.
• Listen carefully what Acharya Shri Mahashraman says about him

• Muni Mahendra has met many distinguished personalities. Just before Diksha, in 1957, at New Delhi, that is before becoming a Jain monk, he along with his father Mr. Jetha Bhai Zaveri, met Dr. Sarvepalli Radhakrishnan, at that time he was the first Vice-President of India.

After he became a monk, he met many leaders such as Past Presidents of India, V. V. Giri, Gyani Zail Singh, Dr. Abdul Kalam, Pratibha Patil. And past Prime Ministers, Indira Gandhi, Rajiv Gandhi, and Atal Bihari Vajpayee, etc.

• Muni Mahendra was the main spiritual inspiration behind the International Conference on Science and Jain philosophy that was held at IIT Bombay, January 2016. You know the great scientist late Professor Stephen Hawkins. But do you know his Mentor was Sir Roger Penrose? The highlight of the conference was that the great Scientist and guru of Stephen Hawkins, Sir Roger Penrose himself participated over Skype meeting for three hours, and appreciated this initiative of International Conference on Science and Jain philosophy.
• Prof Muni Mahendra Kumar is well known for his study about the mind, wisdom and intelligence, Emotional Quotient the EQ, and so on. His Holiness Dalia Lama publicly appreciated Muni Mahendra Kumar at the Mind and Life 22nd conference in New Delhi, India, on November 21st, 2010.

• Muni Mahendra has written a masterpiece, the title of the book is The Enigma of the Universe. Now you know our former President of India, Dr. APJ Abdul Kalam. He is a renowned missile scientist. He met Muni Mahendra and was so impressed by the manuscript that he planned to release the book at his own residence at Delhi. The book is a unique blending of Jain mathematics and Cosmology. A detailed mathematical discussion of innumerable and infinite numbers is an innovative approach in the whole history of mathematics.

Posted by Jyotindra Zaveri at 11:01 PM No comments:

Challenge to all religious leaders, Guru, and activists

Why this video has crossed TWO CRORE (27 M) views?

"Red Dead Redemption 2" allows players to interact with any characters in its vast, open-world environment and fight with GUNS!

What counts as 'gratuitous violence'?

"Red Dead Redemption 2" allows players to interact with any characters in its vast, open-world environment.


This tsunami of the interactive game is engulfing young people all over the world.

This game culture is a serious challenge to all religious leaders, Guru, and activists. All your preaching about peace has gone down the drain?

These companies have a big budget to invest to create interactive video games to promote violence and fights.

What can you do to stop this 'Gun Culture'?
Your comment will be appreciated.

This blog post is published by Jyotindra Zaveri, a Meditation teacher. Whatsapp +91 9552946949

Posted by Jyotindra Zaveri at 10:47 PM No comments: