Earn money as well as blessings

Be your own boss.  Financial Freedom!

Earn money as well as blessings from people by giving health and lifestyle products.
Are you a good networker?

Become a distributor of an ISO 9000 company that is well established since 1998. Importing exclusive products, no competition (not available in common shops).  Enter early to get early bird advantage.  No up-line /Down-line. New unique Board-System on website, team from all India helps you to get success.

Do you bargain when you go to Hospital?


Yes! There is, if you are ready to look for ALTERNATIVE MEDICINES or not traditional allopathic treatment.  Innovative idea. Bio-Ceramic products for long lasting relief, avoids relapse.

Go for it today.  Reputation check on Social Media

Posted by Jyotindra Zaveri at 1:29 AM No comments:

Do not miss this opportunity to hear his words of wisdom at the International Conference on Science and Jain Philosophy. 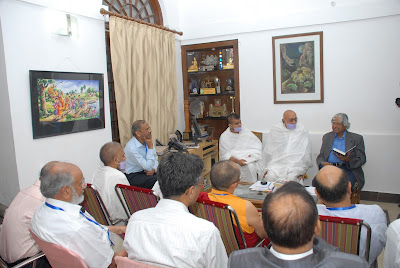 Posted by Jyotindra Zaveri at 12:45 PM No comments:

Therapy for what?
Testimonials:


About Conybio:
How to get these products:
Informal websites and social hub:

Posted by Jyotindra Zaveri at 9:17 AM No comments:

Pharma cos confess that they were NOT ETHICAL? 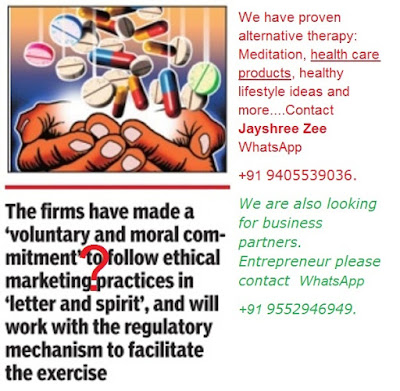 We have proven alternative therapy: Meditation, health care products, healthy lifestyle ideas and more....Contact Jayshree Zee WhatsApp +91 9405539036. We are also looking for business partners. Entrepreneur please contact Jyoti Zaveri +91 9552946949.
This news is startling: Forum Working To Push Ethical Marketing!
For the first time ever, some of India's biggest pharmaceutical companies, cutting across their respective associations and representing nearly half the Rs 93,000 crore market, have come together to push for ethical marketing practices to clean up the industry's image.
The forum, comprising of 40 to 50 domestic and MNC firms, had its first closed door meeting on October 14.It has made a “voluntary and moral commitment“ to follow ethical marketing practices in “letter and spirit“, and will work with the regulatory mechanism to facilitate the exercise.
Earlier attempts at bringing about a code acceptable to the entire industry had failed, as the associations -the Indian Pharmaceutical Alliance (representing domestic firms), MNCs-led Organisation of Pharmaceutical Producers of India (OPPI) and the Indian Drug Manufacturers' Association (IDMA) -were at loggerheads.
This comes even as the government has already expressed its intention to make the `Uniform Code of Pharmaceutical Marketing Practices' mandatory from next year. The code -banning cruise tickets, freebies and paid vacations for doctors sponsored by drug companies -is voluntary at present. But in light of rampant violations, the government plans to make it binding on companies.
The group -which includes top ‪#‎MNCs‬ like Novartis, MSD and Abbott, and domestic firms Sun Pharma, Zydus Cadila and Dr Reddy's among others -wants to start a movement and build pressure on those who are not following ethical practices. A “voluntary“ coming together out of sheer “moral commitment carries greater weightage“ than guidelines being thrust on them, said an expert, who is part of the forum.
“We have come together voluntarily to push for ethical marketing practices,“ IPA director general D G Shah said. “Over the years, our industry has been maligned.“
The `Forum of Pharmaceutical Ethical Marketing Practices' will draw a core working group from the firms to decide the modalities of taking the “movement“ forward, and is in favour of a body similar to the Advertising Council of India to regulate the code.
Even after the code kicked in this year, complaints continued, with many saying that it existed only on paper, as firms aggressively try to influence prescriptions.
“We plan to seek clarifications from the government so that it (the code) is tweaked into a more practical and implementable code,“ said Ranjana Smetacek, director general, OPPI.
Source: Times of India News
Lifestyle and Health
‪#‎health‬ ‪#‎yoga‬ ‪#‎meditation‬ ‪#‎pharmaceutical‬ ‪#‎alternatemedicine‬ ‪#‎conybio‬
Posted by Jyotindra Zaveri at 11:44 AM No comments:

You know if your mind is wandering you need to spend more time doing a task. Learn proven and scientific techniques to train your mind and increase your operational efficiency.

In today’s competitive world it is necessary to be Plus One than others. In the process lots of tension is developed in the mind. This tension results in high blood pressure, insomnia and other psychosomatic diseases. Learn how to release tension by a proven relaxation technique known as Kayotsarg.

Emotional Quotient or EQ is all about measuring emotions. Learn how you can acquire virtues and good habits and get rid of negative emotions by a proven technique of Anupreksha or Contemplation Meditation.


The program is organized by the Terapanth Professional Forum, Pune, India.

The program will be conducted in English.

Posted by Jyotindra Zaveri at 9:05 AM No comments:

Stretch your body and experience alternate physical tension and relaxation - Do it three times.


Tāḍāsana stretches the arms, the chest, the abdominal muscles, the spine and the leg muscles along with giving a sense of balance. This is an easy asana and can be done by all age groups.

1. TAKE A DEEP BREATH and stretch the arms, shoulders and chest upwards.
2. Raise the heels so that the weight of the body is borne by the toes.
3. Stretch the whole body from the feet to the head.
4. Remain in this position for few seconds.
5. Bring down the heels while BREATHING OUT.

Posted by Jyotindra Zaveri at 8:44 AM No comments:

A charitable description of the judgement would be to call it a digest of arguments and rival contentions, compiled in haste, arranged without finesse, concluded largely without logic and reason, and written perfunctorily and casually.

Forty-one of its 46 pages are a mechanical collection and recitation of rival contentions, with the last four pages perfunctorily reaching the above conclusion, without repelling any of the detailed material and weighty submissions of the Jain community.

Secondly, the Article 25 constitutional guarantee of freedom of conscience and right to freely profess, practise and propagate one's religion is repelled qua santhara by reaching the startling conclusion that there is no evidence or material to show that santhara has been practised by Jains as a religious tenet prior to or after 1950! This will make ancient scholars turn over loudly in their graves and Jain researchers, analysts and authors weep.

References to santhara are many and diverse, physical as also documentary.  Many were filed in the high court.

It is explained extensively in Ratnakarandaka Shravakachara of 2nd century AD by Acharya Samantabhadra (Shlokas 122 to 135, also translated by Champat Rai Jain); Chandragupta Maurya, who took and implemented the santhara vow, is archaeologically depicted by ASI Bengaluru Circle 2005; the commemorative Brahmdev pillar at Shravan Belgola of 974 AD with the Kannada inscription depicts the valour and greatness of the Ganga King Marsimha, who, after fulfilling all his promises, relinquished sovereignty, observed the santhara vow for three days and attained Samadhi in the presence of his guru Ajithsena Bhatarakha; diverse memorial stones depict 13th-century Nishadhi Jains in Haveri district of Karnataka doing santhara; Hermann Jacobi's several books, Umaswati's Tatvavarthasutra, Millacra's KundaKunda and so on.

Thirdly, the judgment proceeds to propound that santhara has not been treated as an essential religious practice in any of the scriptures and, further, that what is required to be shown is not only that it is an essential Jain religious practice but that this practice is necessarily required for immortality or moksha or that this “is the only method without which moksha is not attainable“. This is a grievous legal error compounded by the earlier factual ignorance.

There is no mention of the word “essential“ nor of “essential religious practice“ in Article 25. Ambedkar's speech in the Constituent Assembly on December 2, 1948, and the early 1950s Supreme Court judgments make it unambiguously clear that “essential religious practice “ is used in contradistinction to non-religious secular activities. A key shift changes the word “essential“ from qualifying the nature of the practice (religious versus secular) to the later apex court orders using the same word to qualify its importance within the religion (i.e. essential to religion).

The high court proceeds in blissful ignorance of both the factual material referred above as also such legal nuances while arriving at sweeping conclusions, without giving a single reason why the aforesaid diverse ancient material does not qualify this practice as an intrinsic and essential part of Jainism.

Fourthly, the judgment has completely mixed up the philosophical origins of santhara and its fundamental conceptual differences with suicide, sati or euthanasia. Santhara is simply a Jain way of mastering the art of dying as much as the art of living. The animating object of the exercise is neither speedy death nor desire for enhanced lifespan.

Preconditions for santhara are an unavoidable calamity, terminal illness, great natural disaster or imminent death in old age. A Jain may then embark on the ultimate renunciation of his life by preparing for a cheerful, stoic and positive outlook on death after having sought all forgiveness and made every attempt to divorce himself from every possible attachment of life (like affection, attachment, grief or fear), in order to ensure permanent escape from the eternal and unending life cycle of karma.

By purely passive acts of omission, he may let life ebb away with bravery and stoicism. All the negativity, depression, despair, hopelessness, exhaustion, frustration, anxiety or tension associated with suicide is conspicuously missing as also are acts of positive commission involving himsa (violence), which are an essential ingredient of suicide and which, being anathema to Jains, are proscribed.

Similarly, the passionate attachment to a departed relative, the violent acts of commission and the glorification associated with sati are the very antitheses (opposite) of santhara, apart from the significant difference that sati has been banned by parliamentary enactment.

All these fundamental differences are ignored in a simplistic, casual, superficial and perfunctory approach of the high court and no such analysis worth the name finds mention in its operative paragraphs.

It is a patently erroneous judgement waiting to be reversed and rectified.

Posted by Jyotindra Zaveri at 12:29 PM No comments:

In Jain Darshan, it is asserted—“Freedom is my birthdom.” Here ‘freedom’ is in context of ‘Soul’.

This is possible only in human life (or exceptionally even by an animal endowed with “clairvoyant intuition” or extra-sensory-perception), but not in celestial or infernal life.

Why, then, the canons of Justice should not approve of this noblest act?

On the other hand, if anyone, in name of canons of Justice, Law or Constitution, hinders it or dubs it as a crime punishable according to Law, then how such verdict can be “respected”?

Does it not amount to autocratic atrocity or sheer ignorance of canons of Justice or an utter injustice?
Samlekhana or Santhara [संथारा]  is a 100% spiritual act was undertaken not for “dying”, but for spiritual good in conformity with the canons of Spiritualism.
I appeal to those who are Fathers of Canons of Justice to ponder over the issue in the light of what is written here.

Posted by Jyotindra Zaveri at 9:36 AM No comments:

For whom?  Anyone who would Like to be healthy – not only physically but also mentally and emotionally.

Happy feeling is:  “Great to know that meditation has a proper scientific basis that can help healthy and happy lifestyle”.Saddest feeling after 17 August is: “I should have attended this Shibir”.

Posted by Jyotindra Zaveri at 5:48 AM No comments:

Non-violence is the best religion in the world - do you agree?

Your comments will be appreciated

Posted by Jyotindra Zaveri at 8:25 AM No comments: